Explore what scareware is & how it infects devices. We’ll also share scareware examples & how to protect yourself from scareware scams

Imagine that you’re surfing the internet when, suddenly, you receive a notification telling you that your computer is infected with multiple viruses! The message appears legitimate and says that using their antivirus software will eliminate the threats. But, in reality, all it does is allow worthless or malicious software to install on your device. This is just one of many scareware example scenarios users have encountered over the years.

But exactly what is scareware? And why is it something that all users should be aware of when using the internet?

Scareware refers to scam tactics and fake software applications that cybercriminals use to incite feelings of panic and fear. They do this to get users to make irrational split-second decisions and to trick them into:

Scareware scammers use social engineering tactics and language that create a sense of urgency in their targets to compel their targets to act. But how do they reach their victims? They frequently rely on pop-ups that are designed to look like antivirus alerts. In some cases, the messages can take over part (or all) of the target’s screen.

What Does Scareware Do?

At best, the software does nothing and “only” costs you the money you spent to buy it. But oftentimes, the software causes harm by installing malicious software that can:

Some types of scareware rely on the user downloading the software. Others will auto-download without the user’s knowledge or consent. But why bother doing this at all? The purpose of the scareware can be to achieve any of the following:

To better answer the question “what is scareware?” let’s look at a few scareware examples. 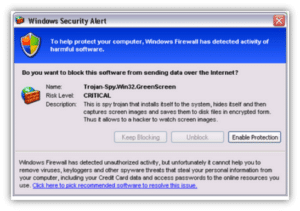 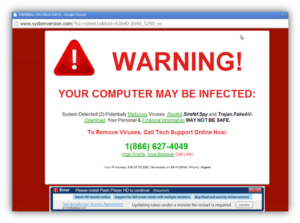 How Does Scareware Work?

Not sure how a scareware scam works? Basically, it involves using social engineering-based tactics to manipulate people into downloading or buying software. Now, the software could be harmless; but in some cases, it could be downright nasty and malicious. In either case, the goal is to get victims to pay the scammer or get them to install software by eliciting fear and a sense of urgency.

Here are some common methods that scareware operators (hackers) use to carry out their scareware attacks and to distribute malware:

What Happens to the Scareware Victims?

Let’s find out what happens if you fall for such a scareware attack.

How to Protect Yourself Against Scareware

Security software (i.e., antivirus, antimalware, antispyware, firewall, etc.) is your first line of defense against scareware. It scans your device in real-time, detects, and removes many types of malware, including scareware. When you accidentally or intentionally try to visit a scareware-laden site, the good security software blocks these websites and downloads or shows you an alert notification.

Just because you see a pop-up window, email, or an ad banner telling you that your device is infected with viruses, you shouldn’t automatically believe it. Never download or install any unknown security software or call tech-support numbers believing such pop-ups even if you see signs of malware infection. Instead, download and scan your device with only with some reputed and trusted antivirus programs like Bitdefender

3. Close the Window and Quarantine Your Device

Don’t use the “X,” “cancel,” or “close” buttons to close the window. It might trigger automatic malware downloads. Instead, close your browser by pressing Ctrl-Alt-Delete. If you see a scareware window and can’t get rid of it, disconnect your device from Wi-Fi and all other connected IoT devices (like your printer, scanner, router, etc.). Then, open the device in safe mode and scan it with a trusted antivirus program. If that doesn’t work, you can turn your computer to a reliable tech-support center or professional in your area.

This should be your last option and is something you can employ if you have scareware on your device. Use it if the scareware infection is spread in a way that you can’t open any files, browser, or access anything, and the security program and tech support professional can’t solve the issue. By wiping out the device’s memory, you will lose all the saved data of your device and won’t be able to recover anything after that. But on the other side, you will be able to get rid of all the scareware traces and save your device.

Not everyone is tech-savvy and aware of various cyber threats. But after reading this article, you know what scareware is and that if you see a potential scareware notification, you shouldn’t panic or make a fear-based decision. The best defense against the scareware is to:

Here’s how to talk to us.